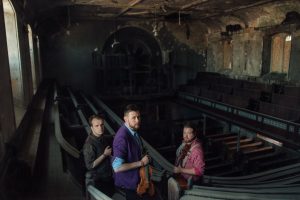 VRï are a new and exciting string trio from Wales, who’s objective is to present their native traditional music in a chamber music aesthetic. Although their roots are in Wales and the backbone of their repertoire is Welsh, VRï make a point of blending other traditional musics from around Europe, and have been heavily influenced the ‘chamber-folk’ artists from both sides of the Atlantic. VRï’s vision has always been to maintain the integrity and individuality of their fiddle styles within the ideals of classical chamber ensemble, to deliver a product which harnesses both the raw energy of the fiddle and the finesse of the violin.

VRï are touring to celebrate the launch of their debut album this Autumn – not to be missed!

Patrick Rimes has extensive touring experience across 3 continents with the likes of Calan and Cerys Matthews Band. He plays fiddle, viola and add’s some flagrantly appropriated Quebecois foot percussion.

As one of the leaders of a new generation of trad cellists in Wales, Jordan Price Williams is in the interesting position of almost entirely inventing a new style – although he is strongly influenced by eminent cellists such as Natalie Haas, his voice is unmistakably his own. He is also a member of Elfen.

Aneirin Jones is part of the new wave of young traditional musicians coming from Wales. Already having been working professionally since the age of 16, he is now studying traditional fiddle at the Royal Conservatoire of Scotland – but he remains a Welshman through and through!

When their three vocals are combined with their three fiddles a power and sound is generated which is more than the sum of their parts.