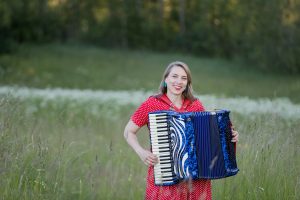 It’s rare that accordion music is described as innovative and fresh, but Tuulikki Bartosik specialises in confounding expectations. A master international musician from Estonia, whose work ranges from introspective and beautiful solo pieces to projects and collaborations with some of the finest box players around, Tuulikki first came to UK attention with Chatterbox, her album with accordionist and clog dancer Hannah James. Recorded in the Welsh countryside, the location inspired some spontaneous and unorthodox musical adventures – including recording in a cave!

Chatterbox was selected by the Telegraph as one of its best folk albums of 2015. Tuulikki and Hannah’s instinctive musical rapport and infectious on-stage banter have made them an immediately sought-after live duo for British festivals and venues.

Tuulikki’s solo album, Storied Sounds, is equally rooted in the natural world. New, site-specific accordion compositions incorporate field recordings of birdsong, murmuring rivers, abrasive seagull cries and even the growl of the city. Storied Sounds creates a vivid context for music that is by turns robust, joyous and wistful.