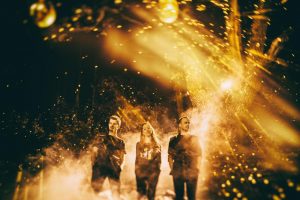 Trad.Attack! has really turned Estonian music scene upside down by bringing traditional music to the big stages, building modern world around its archaic sounds. It is often said that the band with its three members sounds so big that you would think there’s much more people on the stage.

TRAD.ATTACK! draws it’s inspiration from archive recordings of the great Estonian folk singers and instrumentalist who created and performed music for work, leisure and festivities in the old times. Trad.Attack! takes it from there and brings their voices and their music to 21st century: sometimes starting with scratchy recordings of long vanished village voices – and building pulsating rhythmic structures, creating an impressively big sound from acoustic 12-string guitar, drums, an array of whistles, bagpipes and jew’s harps.

Folk music is definitely their starting point, but not their boundary. They are young modern people: maintaining their traditional roots in ears, mind and soul, TRAD.ATTACK! experiments with different styles and musical directions.

All three band members grew up with music around them and each had been active on the Estonian music scene for more than 15 years before they started Trad.Attack! in 2014. In the beginning it was meant to be just simple, fun and experimental. Surprisingly for the band, their first tune “Kooreke” became a hit in Estonia… Since then the band has received 14 Music Awards in Estonia, released their debut album “AH!” recognized internationally and toured in 31 countries from China to Canada, including significant showcase festivals as WOMEX, Eurosonic and Transmusicales.