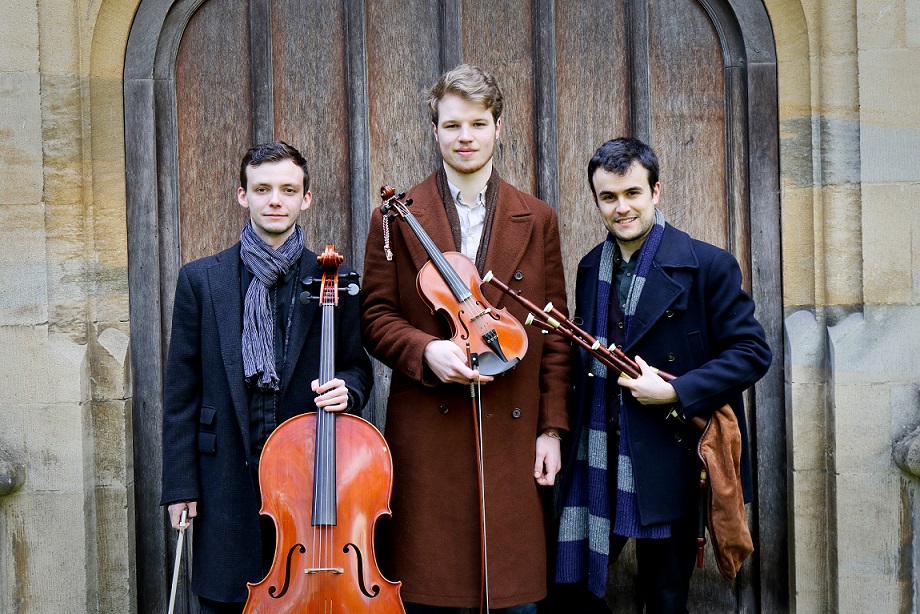 The Savage Prunes are an innovative instrumental trio, performing new music on traditional instruments. Combining the talents of bagpipe virtuoso Callum Armstrong, classical cellist George Pașca, and folk fiddler John-Francis Goodacre, they play complex and compelling music, all of which is newly composed by members of the band. These pieces draw on folk traditions from across Britain and France, as well as more eclectic sources from baroque to pop. Their debut album Straight Line Talking has already begun to make waves both in Britain and abroad.
The voices of the instruments weave together, creating a rich interplay of sounds in which no-one is just an accompanist.

The lyrical tones of the cello, the rhythmic grooves of the fiddle, and the stunning agility of the pipes all contribute equally to the band’s distinctive sound. In this mix, the trio’s distinct musical backgrounds can be heard. George, originally from Romania, is a classically trained cellist who enjoys exploring and creating new techniques for his instrument. John-Francis grew up surrounded by folk music, and began his playing under the tuition of acclaimed English fiddler Sam Sweeney. Callum spans this divide, combining a deep understanding of British piping traditions with a training in classical recorder and composition.

‘It has the drive and rhythmic push of dance music but also the complex interplay of sounds that you would hear from a chamber trio.’ fRoots Magazine

‘Inventive, expressive and above all different .. this progressive folk is as vital as it comes.’ FolkWords