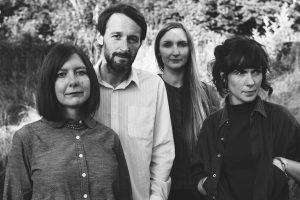 Nominated ‘Best Traditional Track’ with The Unquiet Grave and Emily was nominated for ‘Folk Singer Of The Year’ at the BBC Radio 2 Folk Awards 2016.

Described by MOJO as ‘a mouthwatering collaboration’, Alasdair Roberts, Emily Portman, Lucy Farrell and Rachel Newton are four fine soloists sharing a mutual love of traditional songs, from both sides of the English and Scottish borders, with playful, boundary-defying musicianship.

Since their critically acclaimed debut At Our Next Meeting, The Furrow Collective has been in demand as a touring band, gigging throughout Europe and performing BBC live sessions. Hot on the heels of two BBC Folk Award nominations, they released their new album ‘Wild Hog’ on Hudson Records on 4th November 2016 to huge critical acclaim.