‘The versatility of Elephant Sessions is its strength. Passionate about their culture and their origins, these Scots are using their instruments like weapons to destroy clichés. ..We love them ‘ Rolling Stone Magazine

2017 has been a remarkable year for Elephant Sessions. The band who hail from the Highlands of Scotland and who met at the Newcastle University Folk degree have exploded onto the indie folk scene with unparalleled effect.

The release of their album ‘All We Have is Now’ in June of this year, was followed by live appearances at some of Europe’s most notable festivals. Audiences crowd surfed their way through the summer and marquee floors broke under the weight of bouncing fans.

Charting in the French download charts and selling bucket loads across Europe ‘All We Have is Now’ has firmly established this band as completely unique.
Elephant Sessions transcend boundaries and shake the very foundations of expectation.
Closing the year with sell out shows across the UK, the band find themselves nominated for both Folk Album of the Year and Live Act of the Year at the BBC Scots Trad awards.
2018 promises to be no different and opening the year with a show at the world renowned Celtic Connections festival, the band head over to Australia in March for what will be a debut tour of some of the nations most respected festivals.

This year also brings the recording of the band’s highly anticipated 2nd album, already touted as being one of the hottest releases of 2017. Set for release in January, the album raises the standard higher still with a thicker, even more potent and progressive sound and style, guaranteed to set the 2017 festival circuit ablaze! Do not miss this band. 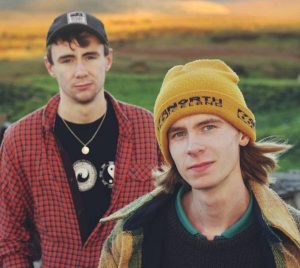 The Drystones are a duo whose arrival on the UK folk scene is making waves. Combining traditional music’s timeless instrumental union of fiddle and guitar with technical mastery, a ‘brave experimental bent’ (David Kidman – FATEA), and a live sound that seems bigger than the sum of its parts, it’s no wonder they’ve been described as ‘indecently talented’ (Mike Harding) and earned themselves a nomination for the 2018 BBC Radio 2 Young Folk Award. Having formed in 2011 to play at the local Priddy Folk Festival, in Somerset, the last six years have seen them play prestigious festivals including Glastonbury and Sidmouth Folk Week, produce two albums, and somewhere along the line complete their music degrees…
In 2018 they are freshly graduated, with nothing to hold back their finely honed blend of the most thrilling aspects of the UK’s traditions. They are rolling out their acclaimed 2017 album along with their breath-taking performances at venues across the UK and are determined to leave smiles on faces as they go.