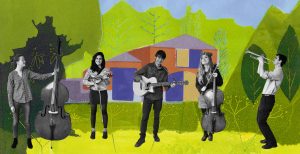 The Coach House Company return with their annual Christmas shindig. Expect new takes on old carols, old takes on new(er) seasonal songs and bucketfuls of Christmas cheer. Sold out for the last 3 years in a row, Christmas just would not be Christmas without this fun-filled festive folky fun!

Since their formation at university in late 2010, five-piece folk band The Coach House Company are rapidly becoming known for their uplifting and wholesome sound through dynamic live performances in London and Cambridge. Inspired by the folk heritage of the British Isles, the band fuses traditional jigs, reels and folksongs with rich harmonies, instrumental virtuosity and compelling upbeat rhythms to create a unique folk expression. Original compositions and arrangements form the core of the band’s repertoire, which is also infused with influences from the classical and jazz domains.

“refreshing and uplifting (…) one to watch out for” – Folk Radio UK