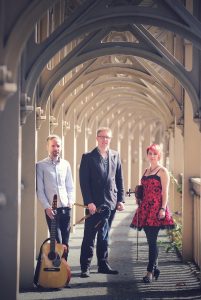 A typical performance might include traditional tunes from Northumberland, newly-composed material by all members of the band and an introduction to the pipes, all delivered with a warmth and humour which is sure to draw in both folk aficionados and newcomers alike for a dazzling show filled with virtuosity and energy.

There’s a certain connection only heard between musicians after many years’ playing together; after more than a decade’s music making together in various guises the tight interplay and sense of fun between these three friends is sure to delight.