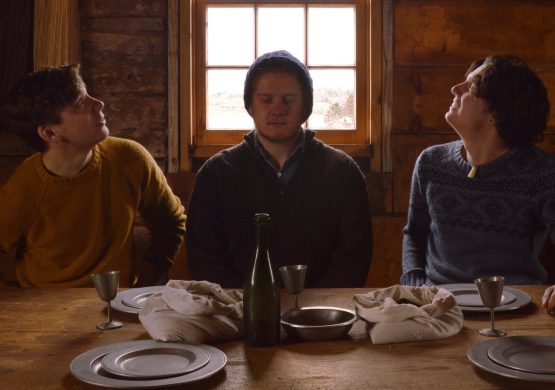 Hailed on two continents as” infectious” and “the best of contemporary/traditional Celtic music” Ten Strings And A Goat Skin is a bilingual trad/folk/fusion trio, playing Irish, Acadian, French and original creations infused with modern and world rhythms. The band creates a fiery, contagious and unique sound which leaves audiences wanting more.

With both French and English audiences, be it with the indie music crowd or the pure traditionalist’s, band members easily connect and notably, their fan base carries no age barrier. A performance review by Marque Wire Magazine, WI, at Summerfest Milwaukee ( hailed as the biggest music festival in the world) said that “While groups like Bruno Mars and Motley Crue were amazing, other smaller acts like Ten Strings And A Goat Skin (“a gem”) were every bit as good.”

Band members Jesse Periard, Rowen Gallant and Caleb Gallant highly respect the traditions of the music they play but are riding the wave that is redefining the roots of that music. Their original material maintains solid traditional elements but explores rich world flavours and textures. The results have been described as “intoxicating” and “refreshing” prompting a programmer for a major US festival to state “I don’t like Trad but I love this!” They were subsequently given a main stage billing at his festival.

All three members are proudly Canadian but their roots are twisty. Rowen and Caleb, natives of Prince Edward Island on Canada’s eastern coastline, come from Acadian, Irish, Scottish, and English heritage. They were fortunate to grow up at time of French/Acadian cultural and linguistic resurgence within the province. Jesse grew up on Prince Edward Island but was born in Canada’s only remaining French province, Quebec, and so grew up in a bilingual home. All were graduates from French First Language schools and do believe their cultural backgrounds and influences help them appeal to a wider range of music lovers.

From humble beginnings came the music of Ten Strings And A Goat Skin with a first performance at a community fundraiser held to aid in the painting of the local parish church in Rustico, PEI. Not having a band name to introduce the boys few sets, a family friend took stock of the instruments and suggested the name that has served them well ever since.