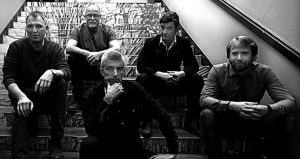 Shooglenifty, roughly translated as ‘the bringers of joy’, return to England, featuring very special guest fiddler Eilidh Shaw this May. So, take a break from the everyday and lose yourself in some superlative Scottish dance grooves. Whether full on birling, gentle swaying or just foot tapping is your thing, the devilishly dirty rhythms will transport you to a wild, slightly leftfield ceilidh where anything goes.

Eilidh is best known as fiddler for the globally-influenced folk group The Poozies. She’s originally from Taynuilt, near Oban, on the West coast of Scotland, but spent her twenties in Edinburgh, where she shared a flat with Angus R. Grant, led many of the fantastic, ground-breaking sessions and was involved in a huge number of projects with musicians across the genres.  Like Angus her fiddling style has remained firmly rooted in the West Coast of Scotland (she was also taught by Angus’s dad), but picking up a world of other influences along the way has meant she has evolved her own very distinctive style.

As subjects of a major documentary, The High Road to Who Knows Where, band members are considering their past (27 years together and counting) and planning their future in the full glare of the camera lens. Throughout the year they’ll be working with some of the guest fiddlers from the Celtic Connections gig for live performances and their forthcoming album, The High Road to Jodhpur.

The tour of England will be their first outing following the concert hall gig. Audiences can expect high energy performances with tunes and songs from their 2015 release The Untied Knot, favourites from their extensive back catalogue, and some of the new material to emerge from the Shoogle shed over the past couple of years.

There will be dancing.