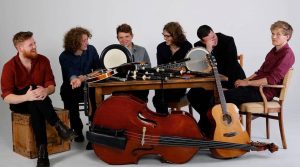 2015 Celtic Connections Danny Kyle Award Winners Pons Aelius are an ambitious young instrumental sextet exploring the traditional and contemporary folk musics of Britain and beyond. With bold arrangements and an arsenal of instruments, the band melds age-old traditions with a fresh and innovative attitude.

Since winning a prestigious Celtic Connections Danny Kyle Award in their early days, Pons Aelius have spent the last two years tirelessly honing their sound on stages both at home and abroad, quickly earning themselves a reputation as one of the most exciting new names on the circuit.

The band are; Bevan Morris on double bass, Callum Younger on percussion, Alasdair Paul on guitar and bouzouki, Jordan Aikin on pipes and whistle, Sam Partridge on concert timber flutes and Tom Kimber on tenor banjo and mandolin.

“If you get the chance to see Pons Aelius then bloody well do it because they are bloody marvellous.” -Dan Walsh, BBC Radio 2 Folk Awards Musician of the Year Nominee, 2016.