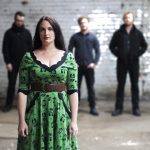 Since her debut solo album, Sweet Visitor, arrived in late 2014, Nancy Kerr has emerged as one of the foremost composers of modern folk and social commentary songs in the British Isles.

Finding herself increasingly fascinated by the role of the environment as a character in music, literature, art and film, the compositions that make up her second release, Instar, explore the themes of human/ecological interaction that lie just beneath the surface of so many traditional folk songs.

The lore and language of nature provide a repertoire of raw, universal images with which to address subjects such as gender identity and sexuality, struggles for human rights, love and consent, colonialism and the effects of austerity on our culture and ourselves.

Nancy Kerr’s Second Instar is just that. The second incarnation of the ever-evolving Instar album. A live performance that draws mainly from that album but also features songs from Sweet Visitor, the show promises to challenge and inspire, confront and sympathise. At times jovial and boisterous and at times a dulcet call to arms.

With her Sweet Visitor Band now an established unit, Nancy is joined on stage by bandmates:

“A songwriter steeped in the tradition, but casting it anew.” Songlines

“Nancy Kerr’s songs are unusual, intriguing. Steeped in folksong, she nonetheless breaks out of the mould, coming sideways to her subject, embroidering it with detail and surprises until the focus of the song comes clear. She is such a good singer that sometimes you really have to concentrate to get the message – but it’s worth it when you get it.” Peggy Seeger