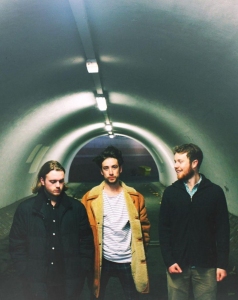 “The music is so rich in detail and so personally, lovingly crafted that it will reveal new facets and deeper resonances with every listen.” -Folk Radio UK

Moore Moss Rutter are a trio of musicians who are reworking traditional native English tunes and songs into something far more contemporary. They aim to breathe life back into ancient material through complex arrangement, virtuosic musicianship, powerful aesthetic and an ear for detail. Their tools – Violin, Melodeon, Guitar and Voice – may be simple enough, but they allow MMR to take the audience on a journey through utmost subtlety, rustic artisanal beauty, and tempestuous climax.

Widely regarded as three of the best players of traditional folk amongst a precociously gifted generation, their finely-crafted arrangements wield a rare potency. Their music features new compositions as well as ancient traditional material from Britain and Europe, this record focuses on their own movements from the countryside to large cities and the contrasts that come into play. Liberally sprinkled with a modern electroacoustic grit, this trio has as much to do with contemporary music as it does with folk or baroque.