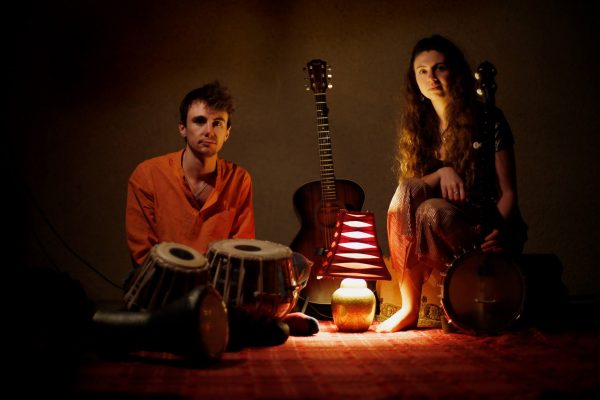 Mishra are a global folk collective with strong roots in U.K folk, out of which they weave a tight web of intricate, Indian-influenced original music that defies definition and has already brought awards recognition since their formation in 2017. Originally a creative collaboration between Kate Griffin (The Unsung Roots) and Ford Collier (BBC R2 Folk Award nominated The Drystones), they have expanded into a collective with a continent-hopping instrumental palette that includes Indian tabla, double bass, Irish whistle, and African calabash. At the heart of their sound are Kate Griffin’s inimitable voice and clawhammer banjo, which soar above the driving rhythms produced by jazz-folk double bassist Joss Mann-Hazell and renowned tabla player John Ball (Rafiki Jazz, Indus), while multi-instrumentalist Ford Collier weaves an agile counterpoint on low whistle and adds yet more drive on percussion and guitar.

They perform in line ups that range from duo to quintet, making each performance a unique experience. In 2018 Mishra won Cambridge Folk Festival’s first ever Christian Raphael prize, the prize money from which they used to record their debut album The Loft Tapes, which features live-in-the-room analogue recordings of their uniquely accessible Indo-folk and was featured in Songlines magazine, where it was described as an “airborne amalgam of cross-continental pollinations” (Tim Cummings) . In December 2019, Mishra celebrated the album release with a U.K-wide tour, in which different concerts featured different combinations of musicians from the collective. The album is distributed by Hudson Records.

“It is a powerful and heady cocktail, yet at times almost mystical as well, bringing together the flavours and ingredients of four different continents, and producing a sumptuous feast for the ears… The Loft Tapes has undeniably forced its way into my top ten albums of 2019.” -David Auckland, Folk Radio