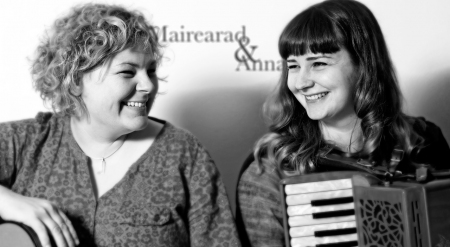 Having played alongside each other for over ten years, they revel in an intuitive approach to each other’s musical ideas and interpretations, and an “almost telepathic communication” on stage (Hi-Arts), effortlessly showcasing the fruits of duo partnership to the highest level , creating “music more than the sum of just two parts” (The Scotsman).

Now based in Glasgow, Mairearad and Anna both grew up in the Scottish Highlands amidst very similar musical backgrounds (most notably, mandolin playing Dads!), and so share an innate understanding of Scottish culture and music. As a duo they have enjoyed many successes, including five stars in The Scotsman and high praise from KT Tunstall, becoming a much-loved live act.

Their three albums – 2009’s eponymous debut, ‘Doubling’ in 2013 and ‘Best Day’ 2015 – have met wide critical acclaim, Mairearad and Anna was recorded live, just the two musicians – the live double act – whilst Doubling features many layered tracks, building a more complex sound, though still just from the two musicians. At the heart of Doubling remains the live duo sets, intricately arranged and executed with symbiotic sympathy, enhancing their “must-see” reputation.

Both award-winners, Mairearad currently performs with King Creosote and Mike Vass and Anna with Blazin’Fiddles and Rant. They have also previously performed with a number of well-known bands and artists; The Poozies, Bella Hardy, Box Club, Kate Rusby, Karine Polwart, Karen Matheson, Capercaillie and together in Scotland’s one and only Celtic Big Band, The Unusual Suspects.