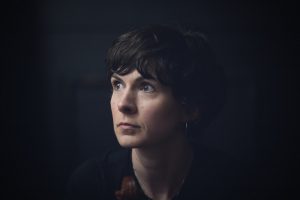 2017 BBC Radio 2 Folk Award winner Lucy Farrell is at last embarking on the solo career so many have been hoping for, since first hearing her exquisite renditions of traditional ballads and quietly moving original songs.

As one fourth of The Furrow Collective, Lucy is the current recipient of the Best Group prize following the release of their widely acclaimed Wild Hog LP, earned during an immensely busy and creative time in which she contributed to the raved about return to form that was the Eliza Carthy & The Wayward Band’s Big Machine album and tour, and also saw her final shows with the Emily Portman Trio with whom she’d sung, sawed and played viola for many years.

An inveterate collaborator, the news that Lucy is to take centre stage in her own right comes as a welcome surprise to all those who’ve been entranced by her haunting and quintessentially English voice, subtle and instinctive musicianship and her ability to connect emotionally with an audience while adhering to the great Shirley Collins’ adage that in folk music the singer should never get in the way of the song.

Signed to the impressively visionary Hudson Records, Lucy Farrell has returned to the traditional folk songs that have remained at the heart of everything she’s done. These are the ballads that inspire her own compositions, but in their own handed-down beauty and strangeness tell fantastical stories beyond our imaginations. And in her voice they bewitch anew.