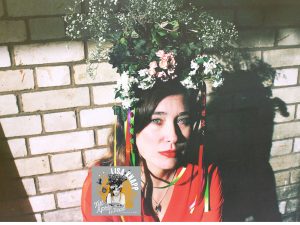 Hailing from South London Lisa came of age during the rave scene before spending time at folk clubs and Irish music sessions.  Discovering traditional music via second hand record shop hoards and friends’ parents record collections;  the music of Anne Briggs, Shirley Collins, Martin Carthy, June Tabor, Steeleye Span, Fairport Convention, Planxty, The Chieftains and The Watersons & many Topic Records releases being amongst them.  Immediately hooked by these stories and songs Lisa embarked on her on her own path of discovery via the Vaughan Williams Memorial Library, fiddle lessons with Irish Fiddle Master Brendan Mulkere, and frequent attendance (a sort of self imposed apprenticeship) at London’s folk clubs, whatever folk song workshops she could find including some with fiddler Pete Cooper, and Irish music sessions where she spent years honing her unique, refreshing and distinctive approach to this vast heritage.

In 2017 Lisa Knapp released her 3rd album Till April Is Dead ≈ A Garland of May.

An explosive celebration of the month of May via the boundless canon of British traditional song and folklore, BBC Folk Award winner Lisa Knapp populates her latest full length release ‘Till April Is Dead≈A Garland of May’ with field recordings of modern life; cars and busy markets as well as old barrel organs, music boxes and sounds of insects and birds, making the connection with landscape and nature emerging, teetering on the edge of eruption.  …….  Placed at No 2 Album of the year in MOJO it also featured in Guardian’s Top 50 Albums 2017 with the title track Till April is Dead amongst Guardian top 100 tracks of 2017.

“As is obvious from her excellent previous two albums, the voice of Lisa Knapp is a many splendoured thing… Here she creates a thematic twine of songs crafted from rituals symbolising the coming of summer.  We also get radical re-imaginings of old favourites… as Knapp and Diver deliver ancient tradition with respect and beauty.”  *****MOJO

As well as releasing ‘Till April is Dead’ 2017 also saw Lisa tour alongside Folk Singer and Collector Sam Lee and singer/sound artist Nathaniel Mann (Dead Rat Orchestra) in ‘Broadsides’ – A unique series of shows( in association with Sound UK) in which the 3 artists delved into the Bodleian Library broadside archive and curated brand new material specially for this project.  Featuring live printing on stage and accompanied by percussionist Pete Flood & double bass player Lisa, Sam and Nathan played to a variety of venues & audiences throughout the UK.  During the summer of 2017 Lisa also toured with Dead Rat Orchestra and experimental film maker James Holcombe in ’Tyburnia’.  Featuring a live soundtrack to a multi-projector photochemical film piece exploring the history of capital punishment in the UK over the 500 years the soundtrack included violins, loops, noise, guitar and songs ranging form 17th century robbers cant to gallows ballads.