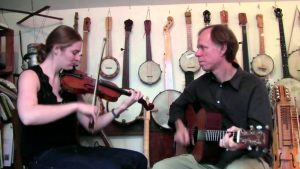 Guitar and banjo player Larry Ungar and fiddler Audrey Knuth are a Boston based traditional duo who play exhilarating tunes with driving rhythms. Their concerts feature American and Celtic tunes with elements of other traditions including swing and blues. They also draw from Larry’s catalog of original fiddle tunes, which have been featured in several of Ken Burns’ documentaries. Declared a “guitar genius” by Sing Out Magazine, Larry Unger joins fiddler Audrey Knuth for an unforgettable evening full of stirring musical experiences.

Larry Ungar has been a full time musician since 1984, and has presented a diverse range of musical performances at contra dances, Scottish dances, waltzes, dance weekends, dance camps, festivals, and concerts all across the United States and in Canada, France, Scotland, Denmark, and Sweden. He’s one of the busiest musicians around, playing for more than 150 dances every year.

Born in the no-mans land of taxation without representation and raised in the Big Pineapple of Honolulu, Audrey thought it was a brilliant idea to move to Boston in the dead of winter to attend Berklee College of Music. She survived and even got a degree in Audio Engineering to prove it. Since exposing herself to the real world after college, Audrey has made a name for herself in the music community, namely as a dance fiddler specializing in New England, Celtic and Old Time tunes.