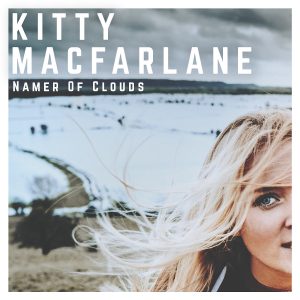 Kitty Macfarlane is a songwriter from Somerset, whose music is rich with visual imagery and written with an eco-eye. From the starling murmurations on the Somerset Levels to the lowly eel’s epic transatlantic migration, and the small part we ourselves play in a much bigger picture, her songs are bound by the underlying theme of mankind’s relationship with the wild. Produced by Sam Kelly and Jacob J Stoney, Namer Of Clouds gathers inspiration from the sky to the seabed. Carried by a voice ‘as clear as a mountain stream’ (FRUK), her lyrics touch on intervention and rewilding, climate change and migration, and woman’s historical relationship with textiles and the land.

“Her remarkably accomplished debut album, Namer Of Clouds, beguiles with its poetry and tenderness, and her eye for detail, vivid imagination and bright vocals make it a captivating listen” – The Guardian

“Stunningly beautiful – what a production, what a sound” – Mark Radcliffe, BBC Radio 2

“Kitty expresses her intense empathy with the natural environment, which we need to treat with respect…. Namer Of Clouds is an impressively mature record” – fRoots Magazine

“An astonishingly accomplished debut album – full of old wisdom and bubbling over with new ideas. A singular songwriting talent… Macfarlane’s pure voice, controlled yet wild, is a revelation, and the production and arrangement is masterful” – Folk Radio