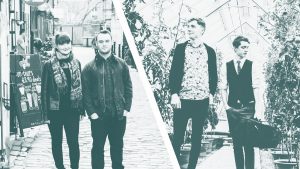 2017 BBC Radio 2 Young Folk Award Winners Josie Duncan and Pablo Lafuente are a vocal/guitar duo like no other.

Calling the Isle of Lewis and Spain home respectively, its no wonder their music doesn’t focus on one place, on one of the many strands of Scotland’s web of traditions.

They are well traveled, and well versed, in music from across the land. On guitar, and vocals in Gaelic, Scots and English, their music is a round tour, where centuries old ballads meet Gaelic puirt a beul, songs from the mines and cotton mills, as well as some original writing.

Josie’s voice, crystal clear. With its slight island twang, equally at home in any of these domains. Accompanied by Pablo’s dynamic, sensitive guitar playing, they illuminate the lyrics. The music at times sparse and haunting, at others driving and all consuming, leaving audiences stunned.

Charlie Grey and Joseph Peach- Scottish fiddle/piano duo. From a largely mellow base, the music rises and falls, slowly building to moments of intensity, breaking away in to powerful improvisation.