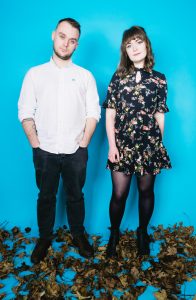 2017 BBC Radio 2 Young Folk Award Winners Josie Duncan and Pablo Lafuente have been described as ‘a vocal/guitar duo like no other’.

Coming from the Isle of Lewis (Josie) and from Spain (Pablo) its no wonder that their music doesn’t focus on just one place or on just one musical tradition. They are both well versed in music from many lands and many different influences.

They are a guitar and vocal duo performing in Gaelic, Scots and in English. Their music is made up from many different elements and styles including ancient ballads, Gaelic ‘puirt a beul’ and industrial songs from the mines and cotton mills as well as original songs written by themselves.

​Josie’s voice is ‘crystal clear with a slight island twang’, and is accompanied by Pablo’s ‘dynamic and sensitive guitar playing which illuminates the lyrics’. Their music is at times sparse and haunting and at other times driven and all consuming, but always aims to delight their audiences.

Pablo Lafuente’s experiences are no less varied. He’s put down cultural roots in Scotland, exploring the tradition to its deepest core. Since completing his studies of guitar and fiddle at the National Centre for Excellence in Traditional music he’s been in high demand, playing, recording and touring internationally with artists including: The Outside Track, Barluath, Sketch and Spanish Gaita extraordinary Anxo Lorenzo.

Since joining forces in 2016 they’ve taken the scene by storm, quickly becoming an in-demand live act at festivals and venues across the country. In their short time together they’ve delighted the audiences of BBC Radio 2, Celtic Connections Festival, Sofar sessions, and a host of venues across Scotland.