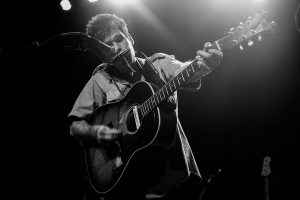 In 2012, Derby, England native and folk-singer Josh Okeefe dropped out of school, traveled across the Atlantic and arrived in Nashville, TN in search of the places his idols Hank Williams and Johnny Cash once graced. He became a regular in the rock and roll clubs on the east side and the legendary honky-tonks on Lower Broadway; met a host of other musicians and began writing songs at an astonishing pace.

​Over a couple of nights in his 350 sq. ft Tennessee log cabin Okeefe recorded his critically acclaimed self-titled debut album with just a borrowed RCA Microphone from the 1960’s that vibrated its diaphragm and carbon to the to the voices of Patsy Cline, Johnny Cash, Guy Clark, and other towering specters of country music. and an Ampex 2-track Tape Machine which Okeefe purchased from JJ Cale’s estate for $100.

​Catapulting himself into the spotlight Josh Okeefe has already performed with the likes of Kris Kristofferson, Alison Krauss and Rufus Wainwright, earned major festival spots and BBC Radio apperances, sang for the people at national and local protests and had his songs recorded by major label artists like Ashley Monroe and High Valley to name a few and this is just the start…

“Okeefe’s voice hits you with the force of a hurricane: a rare, powerful, gravelly sound, the likes of which is usually crafted from many decades of nicotine, alcohol and hard living in the deep south.” No Depression