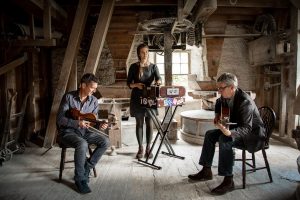 “Jenny Sturgeon is a singer-songwriter who brings together the old and new with a rare skill” – RnR Magazine.

“I love her voice and the way she sings, she’s got a great feel for her music” – Mike Harding

Hailing from the north-east of Scotland, Jenny Sturgeon is a singer-songwriter described as “a significant new talent” Bright Young Folk on the folk and acoustic scenes. Her passion for music lies in her interest in traditional folk song, combined with creating fresh, new compositions. Jenny’s inspiration comes from folklore, historical events and observations of society, and having trained as a biologist nature creeps in to all her work.

Jenny plays in a trio with multi-instrumentalist Jonny Hardie (Old Blind Dogs) and world renowned fiddle player, Charlie McKerron (Capercaillie, Session A9). Her 2016 debut album From The Skein received excellent reviews and was described as “one of the best debut albums you’ll ever hear” R2 Magazine.

Jenny was recently commissioned by the National Trust for Scotland to compose new songs and tunes inspired by St Kilda, to mark the archipelago’s 30th anniversary as a World Heritage Site. The resulting work, The Wren and the Salt Air, was described as “a genuinely inspiring work” RnR Magazine.

In addition to touring with her trio, Jenny plays with critically acclaimed band, Salt House, and with Northern Flyway – a new audio-visual show Jenny co-wrote with Inge Thomson (Karine Polwart, Da Fishin Hands), described as “like watching a David Attenborough documentary but with awesome music!”.  Jenny is also involved in several other projects including running songwriting workshops and collaborating with Aberdeen based artist and fabric designer Helen Ruth.