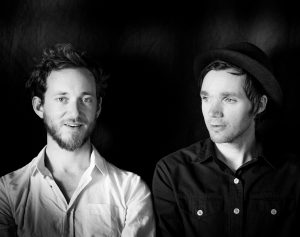 UK alt-folk duo Jacob & Drinkwater have been called ‘stand out new Folk’ by BBC6  Music with their live show described as ‘intense and spellbinding’ by Folk Radio UK. The duo formed in 2014 playing their first gig together at the iconic Glastonbury Festival.

In 2016 they recorded ‘Live at Hope Hall’ with a sell-out crowd at Exeter’s Hope Hall and released an album that captures the intense energy and improvisational nature of the live show and takes the listener on a real emotional journey.

Throughout 2018 the duo performed at festivals in the UK and Europe and London’s historic Union Chapel. In September they embarked on their’Waters Of England’ tour; combining live touring with wild swimming in locations across the UK and documenting their adventures via their social media pages. Gone are the days of post-gig booze ups; the duo are teetotal and promote a healthy, clean living touring regime to support well being and mental health.

The February 2019 “This Old River’ tour will be their biggest to date and coincides with the release of their first full studio album, successfully crowdfunded through Indiegogo.

Singer- songwriter Tobias ben Jacob first received wider acclaim as part of The Roots Union with BBC Folk Award winners Phillip Henry & Hannah Martin (Edgelarks) including playing live for the BBC at Maida Vale Studios and recording in Nashville, Tennessee. He has toured extensively and had several releases including the 2017 album ‘A Polyphonic Life’ Tobias’ songs have been featured in the documentary film ‘Beating The Bomb’ and in forthcoming feature film ‘Tomorrow’ (2018)

Lukas Drinkwater is rightly referred to as ‘one of busiest musicians in the UK.’ In demand as a producer, performer and session player in the worlds of folk and jazz he has featured on many acclaimed albums. Recently he’s been touring with ‘AMA UK Artist of the Year’ Emily Barker, Albert Jones, Ange Hardy, and the Peoples String Foundation. He has also worked with Seth Lakeman, 3 Daft Monkeys, Jim Causley, Lack of Afro, Lucy Ward, Tankus The Henge, Sam Kelly, The Little Unsaid and many more.

The duo’s dynamic and emotionally charged live show with all its energy, musical chemistry and spontaneity has drawn comparisons with the virtuosic pairing of John Martyn and Danny Thompson. Jacob’s sweeping vocals never fail to captivate, delivering many a spine-tingling moment; the fluidity and precision of his finger-picking underpinned by Drinkwater’s nimbly rhythmic double bass; at times sweetly soaring, haunting, percussive and driving, the layers of depth a perfect counterfoil. The added complement of stirring vocal harmonies nicely rounds off the mix. 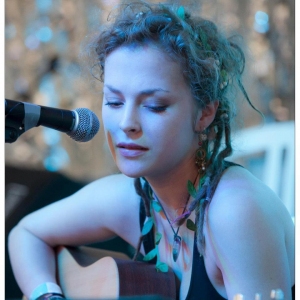 ‘Katherine Priddy is a dream weaver, a hypnotic storyteller and fragile performer who encapsulates the rich and often solemn side of artists gone by such as Nick Drake and John Martyn, delivering each word with a genuine warmth and charm.’

Richard Thompson just named Katherine his favourite artist of 2018 in MOJO Magazine. Quite an accollade for the rising midlands star and her debut ‘Wolf EP’.
“something extraordinary indeed…one of the most beautiful
voices I’ve ever heard. Her tone, phrasing pitch and sentiment…it’s
flawless” Folk Radio UK