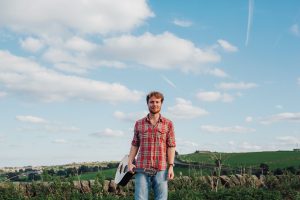 ‘A truly captivating singer of traditional songs, Jack Rutter’s new record feels like one of the classic folk albums of the 70s’ – Jon Boden

‘There’s a refreshing integrity about its stripped-down values. What comes to the fore is the durable strength and beauty of the songs.’ – ★★★★★ Colin Irwin, fRoots

Still in his mid 20s, Jack Rutter (Moore Moss Rutter, Seth Lakeman band, Jackie Oates band) is a highly respected singer, guitarist and multi-instrumentalist making music within the British folk tradition. The recent release of his debut solo album, which is a collection of eleven traditional folk songs, produced by Joe Rusby and recorded completely solo and live in the studio with no overdubs, has been received with across the board acclaim and recognition. Critics are praising his traditional style of singing ‘beautifully sincere, timeless and beguiling’ (Songlines), and playing ‘guitar, bouzouki or concertina accompaniments are beautifully constructed and played – never getting in the way of the song, but supporting and building it’ (The Living Tradition Magazine) that have come together to create Hills, an album which ‘takes him to a whole new level, quite simply outstanding.’ (★★★★ RnR Magazine).

Jack grew up in the Holme Valley area of West Yorkshire, a place steeped in a wealth of traditional song and since graduating from Newcastle University with a BSc degree in Countryside Management in 2014, he’s gone on to forge a hugely successful career playing music professionally in various guises across Britain and Europe. In this new solo outing, the BBC award winning musician delivers folk songs with a rich, unassuming Yorkshire charm and an easy going stage presence that gives a live performance which is ‘wonderful, pure and simple. The audience just falls head over heels for this man, and rightly so.’ (English Folk Expo)