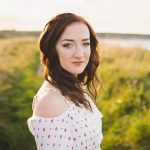 Aberdeenshire folksinger, Iona Fyfe, has become one of Scotland’s finest young ballad singers, rooted deeply in the singing traditions of the North East of Scotland. A finalist in the BBC Radio Scotland Young Traditional Musician of the Year 2017, Iona embraces the repertoire of Aberdeenshire throughout the UK and Europe. In 2016 “East”, a debut 6-track CD encapsulating North East folksong was received with great acclaim.

Hailing from Huntly, Iona interprets material old and new in contemporary yet sympathetic manner, showcasing Scotland’s rich balladry and folksongs. A BBC Radio 2 Young Folk Award 2015 Semi-Finalist, Iona has performed at prestigious venues such as the His Majesties Theatre and The Music Hall, Aberdeen, Glasgow Royal Concert Hall, the Mitchell Theatre, The Royal Albert Hall, London. Iona and her band have performed extensively at festivals such as Celtic Connections and Folkest International Folk Festival in Italy. In 2017, she looks forward to appearances at folk clubs and festivals such as  at Stonehaven Folk Festival, Keith Festival, Sark Festival. Iona is currently working on her debut album, which is set for release in January 2018.

“When it comes to folk music, she has one of the most stunning voices on the circuit today.” – Artree