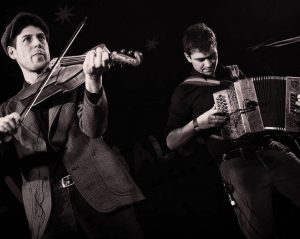 Bursting out of Europe for their second ever UK show, brothers-in-music Baltazar Montanaro and Pablo Golder play energetic, pumping folk music on violin and diatonic accordion that is guaranteed to bring a smile to your face and a tap to your feet.

Combining French, Hungarian, Italian, Belgian and English heritage in just two musicians, these itinerant players can be found year in and year out touring up and down the European continent (and as far as New Zealand), but have somehow never made it to the UK as a duo until 2017’s acclaimed London debut.

Old friends with many shared tales, the wit and interplay between the two will delight any crowd. The pair will be showcasing their brand new third album, ‘Vivat Vivare’, which comes with a 5-star stamp of approval from fRoots magazine.

Come along and beat the Brexit blues!

‘One of the most successful combinations of musicians who have firm and deep roots in traditional dance music but are striving to achieve something new and vibrant’ – Vic Smith, fRoots magazine