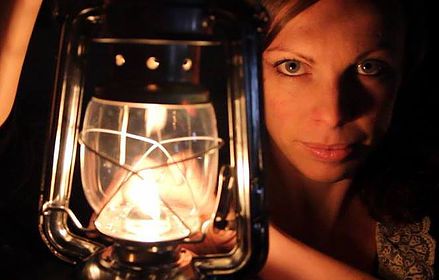 Hailing from Bristol, Heg & The Wolf Chorus has been born out of Heg Brignall’s story-inspired songwriting. They create theatrical, original folk which draws inspiration from fairy tales and the twisted roots of Heg’s family tree, taking the listener on a journey from Grimm’s fantastical forests, across the stormy Atlantic to the black, dangerous coal mines of Illinois and far beyond.

In 2014 the band was nominated for Bristol Folk Festival’s Isambard Folk Award and their trilogy of EP’s (produced by Gareth James Bailey) received critical acclaim, putting the band firmly on the folk map. The title track from the first EP Giant was nominated for ‘Song of the Year’ in the Fatea Magazine Awards 2014.  The sea-themed EP A Tale of Sailors, the second release, followed triumphantly in Giant’s footsteps and was awarded ‘Single of the Year’ by BBC Merseyside’s Folkscene show.

The final release, Rain, which completed the trilogy came out in 2015 and was heralded by fRoots Magazine as “inventive piano and string arrangements and exquisite vocal harmonies.”

During this time the band supported Moulettes, The Crazy World of Arthur Brown, The Lucy Ward Band, Bridie Jackson & The Arbour and Gilmore & Roberts on tour and had a successful season of UK festivals climaxing in a showcase performance with fRoots Magazine at Sidmouth Folk Week. The song Three Sailors was included on the highly regarded fRoots magazine summer compilation.