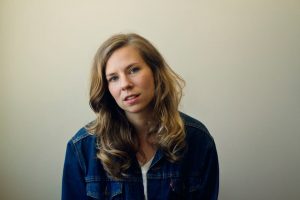 Born and raised in Scotland and now residing in Brooklyn, New York, Hannah Read is a versatile multi-instrumentalist widely recognized on the International stage. She’s best known for her fiddle playing, songwriting and composing and was recently described as one of “the finest singers of the day” in the UK’s MOJO Magazine. Hannah leads her own band and is an in-demand collaborator on both sides of the Atlantic – most notably as part of the critically acclaimed British folk super-group ‘Songs of Separation’, winners of ‘Album of the Year’ at the 2017 BBC Radio 2 Folk Awards.

There’s a dominant roots fusion in Hannah’s original music, which combines British folk with “yearning Americana” (The Guardian), indie and contemporary sounds. With comparisons to Sandy Denny, Joni Mitchell and Feist, Hannah seamlessly weaves in her influences from both sides of the Atlantic. Her songwriting is largely influenced by the people, places and landscapes she has encountered along the way, musings of home and travel, love and loss.