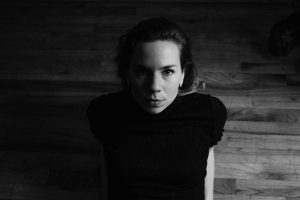 Born and raised in Scotland and now residing in Brooklyn, New York, Hannah Read is a versatile multi-instrumentalist widely recognised on the International stage. She’s best known for her fiddle playing, songwriting and composing and was recently described as one of “the finest singers of the day” in the UK’s MOJO Magazine. Hannah leads her own band and is an in-demand collaborator on both sides of the Atlantic – including one part of the critically acclaimed British folk super-group ‘Songs of Separation’, winners of ‘Album of the Year’ at the 2017 BBC Radio 2 Folk Awards.

Hannah’s latest solo album Way Out I’ll Wander, was released in February 2018 on UK-based label Hudson Records. With comparisons to Sandy Denny, Joni Mitchell and Feist, Hannah seamlessly weaves in her influences from both sides of the Atlantic on an album that’s “deserving crossover status… nine gorgeous originals” (The Guardian). Recorded in winter between Upstate New York and New Hampshire, and produced by Brooklyn-based producer/engineer Charlie Van Kirk, each song on this album captures a very specific moment embodying “an inherent beauty” (Acoustic Magazine) with musings of home on both sides of the Atlantic, as well as tales of travel, love and loss. This album primarily features Hannah’s vocals, guitar, fiddle playing, joined by special guests including Sarah Jarosz, Jefferson Hamer and Jeff Picker.

Emma Miller left the rolling hills of the north east of Scotland in 2014 to move to London where she quickly found herself swept up in the vibrant music scene. She released her debut single in 2017 to much critical acclaim, including support from The 405 and BBC Radio 6. Her effortless vocals and dynamic songwriting create a rich and atmospheric sound which has led to comparisons with the likes of The Staves and Joni Mitchell.

Rifling through her parent’s record collection she discovered artists such as Joni and James Taylor which inspired her to start writing at her piano. However, it wasn’t until she watched a video tape of the Scottish band Texas performing live in Paris that Emma was really bitten by the music bug and started performing her songs in public.

As well as recently selling out her first headline show, she has already been fortunate enough to work with the likes of India Bourne (Ben Howard band, Ry X band) and Tim Elsenberg (Mercury nominated band Sweet Billy Pilgrim) both of whom played significant roles in the making of her first single.

Emma pushes the boundaries between sophisticated pop and alternative folk. Thoughtful lyrics are delivered in a pure, soaring melody and etherial harmonies which truly captivate her audience and pull them into her world.