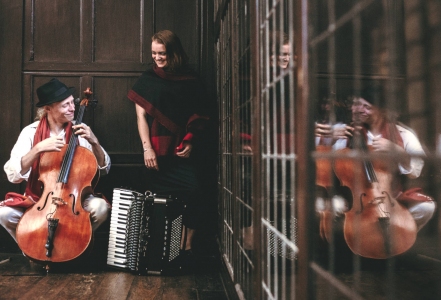 Award-winning folk musician, dancer and composer Hannah James debuts her never-before-seen brand new duo with outstanding cellist Toby Kuhn of France. Hannah and Toby only met last summer but their musical chemistry was immediate. They instantly formed a duo and the interplay between these two master instrumentalists would have you believe they have been playing together for years.

Hannah James has emerged as one of the most imaginative and adventurous artists on the folk scene. First coming to national attention as accordion player and singer with the band Kerfuffle, she was in an acclaimed duo with Bellowhead’s Sam Sweeney, is a member of female vocal harmony trio Lady Maisery, and has worked with folk legend Maddy Prior in the trio 3 for Joy.

Toby Kuhn is a trained classical musician whose encounter in 2015 with the vast world of Folk music has led him in even more directions, in the form of collaborations with extremely talented and dedicated artists such as (but not limited to) Daniel Wall, Sofia Högstadius and Matija Solce; a particularly rewarding experience is his ongoing participation in a string quintet with fiddler and singer Kate Young, with whom he is performing around Europe.