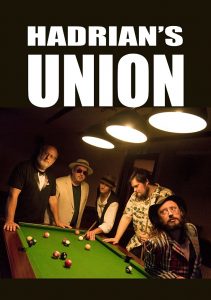 Hadrian’s Union are a five piece contemporary Folk Rock group based in Northumberland.

The band is currently writing, rehearsing and gigging material from their forthcoming album‘Aural Borderalis’ They will be going into the studio early 2017, ‘Aural Borderalis’ will be produced by Saul Rose and ready for general release in summer 2017.

Hadrian’s Union was formed in 2010. They were signed to Fellside Records and now they have a brand new line up and a whole new sound. Hadrian’s Union are Robin Jowett – Melodeon and Keyboards & Brian Bell on Bass Guitar (Robin and Brian were both BBC Radio 2 Folk Award winners in 2005), Malcolm Bushby – Violin. Malcolm has played at the Royal Albert Hall with Folkestra and is the only Tasmanian traditional Scottish fiddler in the UK.

Dave Pratt is a well respected drummer and fine art sculptor with many years experience in various bands. The lead singer/songwriter/guitarist for Hadrian’s Union is the eccentric, energetic and passionate front man Stew Simpson.