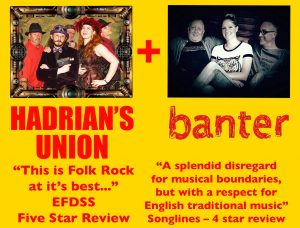 Banter are: Simon Care on melodeon, Nina Zella on keyboards and vocals and Tim Walker on drums, percussion, brass and dance calling. They are rooted in English traditional music but incorporate influences of pop, jazz, soul and big band sounds.

Although just three people, they create a huge sound and have been described as the world’s smallest big band.

Hadrian’s Union are a five piece Contemporary Folk Rock band from the debatable lands of England and Scotland. The name originates from the locality and mindset of the band, Hadrian’s Union (or HU for short) as seperate members are based along various points of Hadrian’s Wall, they all come from various music genres (Folk, Punk, Rock, Blues,Celtic, Ska etc) which reflects in the music they create together.

The music is varied and ultimately for the listener all of HU’s shows and recordings are an exciting experience. Waltzes, Ballads, Music Hall and drinking songs and so much that you will find in the Union. HU will not be pigeon holed into one category but can often be found at Folk festivals in the loosely termed Folk Rock section, they are at home as much at a rock show as they are in a folk club, and to boot they love a bit of Steampunk too.