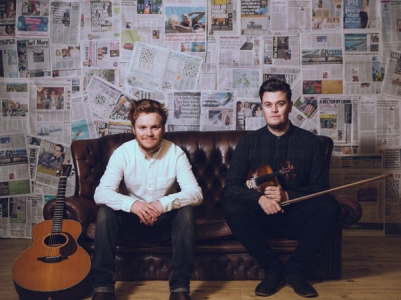 Greg Russell and Ciaran Algar joined forces in 2011. Combining Russell’s powerful vocals and driving guitar style with Algar’s All-Ireland winning fiddle playing, the duo have become one of the most sought after acts on the British folk scene. In 2013 the pair won the BBC Radio 2 Young Folk Award before going on to win the Horizon Award for best breakthrough act from the same source in 2014. In 2015, they were nominated in the BBC Radio 2 Folk Award Best Duo category.

After recording their second album in the November of 2013, again with Fellside, Russell and Algar received the Horizon Award for Best breakthrough act at the 2014 BBC Radio 2 Folk Awards. The second album, The Call, was then released in July receiving 5 Stars in fRoots, 4 Stars in both R2 Magazine and The Telegraph and a host of other brilliant reviews, Bright Young Folk describing it as an “outstanding show of maturity” with “enormous promise”.

The duo come from musical households and both began to develop their musical skills long before joining forces. Algar, originally a member of TRI became All Ireland Champion, and All Britain Champion on numerous occasions before the age of 16 and Russell had begun a career as a solo musician supporting acts such as Karine Polwart and Lau, amongst others.