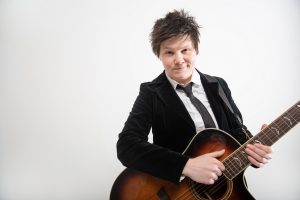 Smart, witty, a talented lyricist and an electrifying live performer, Grace Petrie can take the most hostile room and by the end of the night they will be singing along, ‘Stand up today that we might save tomorrow!’

Given all of this, it’s no surprise she’s toured in support of Billy Bragg, toured for ten years as a self-sustaining DIY artist with virtually no mainstream media coverage and yet when this May she announced a Kickstarter campaign for the recording of her first full studio album ‘Queer As Folk’ she reached the £10,000 target in twenty-four hours and almost doubled that amount by the end of the two week campaign.

In Grace Petrie’s own words, ‘Queer As Folk is a collection of songs that celebrates both sides of the artist that I am: passionate about and deeply inspired by the magnificent tradition of folk music, but seeking and striving always for it to become again the vehicle for radical politics that it once was. Mixing the personal with the political, these songs mean to offer a hand on the shoulder of those whose struggles in this world chime with my own, whether that be with identity, with love or with the faith to fight for a more equal tomorrow. This album is both a celebration of and a step beyond protest singer, offering some of the most urgent and honest song writing I have ever put into the world.’

The album includes Grace’s take on traditional folk track An Old Man’s Tale retitled A Young Woman’s Tale, a blistering cover of Richard Thompson’s Beeswing and the show-stopping Back Tie, which challenges gender stereotyping in missive to her Year 11 self.