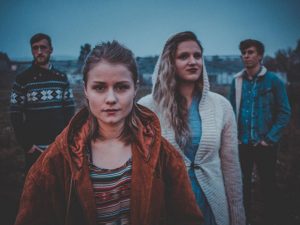 Estbel joins together the best Estonia and Belgium have to offer. On one side you get the Nordic beauty and serenity, on the other the finest sons of the heartland of European folk music.

Estbel are a band consisting of Estonian dreamers Leana Vapper-Dhoore and Sänni Noormets, as well as the Dhoore brothers from Belgium. Estbel’s new repertoire is ripe with magical realism and could be described as a walk with Björk and Gabriel Garcia Marquez in a Northern landscape filled with delicate arrangements and dainty harmonies. Their new programme is diverse and colourful and there is something for everyone – both younger and older folk and indie music fans. Listen, observe and let the music give you a whole new lease of life!

Estbel is a rare line-up of two nightingales from Estonia and two Flemish brothers from Belgium. The band came into existence after the exciting rehearsal week on the Estonian island of Saaremaa in February 2016. Their seven-day stay was an intense experience in a beautiful and inspiring environment. ‘Saar’ means ‘island’ in Estonian and in many ways felt like a very suitable title for the debut album released during the Tallinn Music Week 2017.