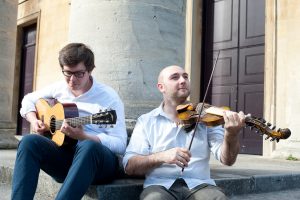 Dipper Malkin are rapidly earning a reputation for elevating traditional music to new heights of sturdy beauty and sophistication.

The ‘potent combination’ (Folk Radio UK) of John Dipper’s unusual 14-string viola d’amore, and Dave Malkin’s finely honed accompaniments and voice have afforded them with glowing praise for their debut album, Tricks of the Trade, which was included in The Times ‘Top 100 Albums of 2017’.

In 2015 Dipper Malkin were the recipients of a Creative Artists Residency from The English Folk Dance & Song Society, to explore ‘the slows’, an idiosyncrasy of traditional dance, which sees the dancer attempt to defy gravity, in the year that marked the 350th anniversary of Sir Isaac Newton’s discovery.

The duo are currently working towards the release of their second album which will feature four newly-commissioned works for viola d’amore and guitar from composers from a variety of musical backgrounds, as well as improvisations and reimagined traditional material.