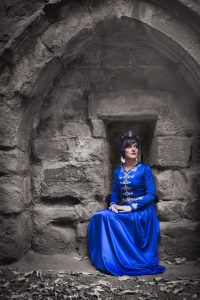 With her striking voice and strong Russian and Ingush heritage, “bold, exotic, impressive” Daria Kulesh is a rising star and a unique character on the UK folk scene.

Daria’s intrepid quest to explore her family roots in the new solo album Long Lost Home has led her from the folk clubs of Hertfordshire to the mountains of Caucasus; from Cadogan Hall to Gradsky Hall in Moscow. The album has enjoyed rave reviews, described as “superb”, “10/10”, “remarkable”, “a masterpiece”, “a triumph”, “fascinating and enjoyable in equal measure” and has led to high profile live performances as well as TV and radio appearances.


Long Lost Home is mainly inspired by Ingushetia (Ghalghai Mokh) – the lost home of Daria’s Grandmother Fatima Akhrieva. A mountainous republic in the south of Russia, it’s a land of immense beauty and harrowing tragedy, of fascinating culture and age-old traditions. But above all, Long Lost Home is an album for our times, exploring themes of displacement and (in)tolerance, identity and integrity, humanity and strength in the face of adversity, hope against hate; it’s “an album for everyone”, according to Northern Sky Magazine. Expect powerful, timeless human stories beautifully told in an eye-opening and profoundly uplifting musical experience.

“Haunting and enigmatic” (The Times); “One of the most beautiful songs of the last 10 years” (Mike Harding); “One of the most refined and enjoyable voices around” (Folk All); “A definite contender for the best album of 2017” (FATEA).