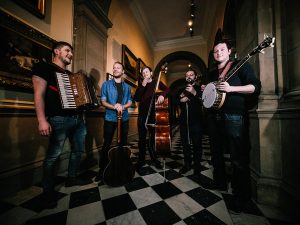 Dallahan is one of the most thrilling forces in the international folk music scene; heavily rooted in traditional Irish music, but with hugely diverse backgrounds and influences. They call on their mixed Irish, Scottish and Hungarian heritage to create a unique and seamless musical montage, drawing in influences from jazz, funk, pop and classical music. Dallahan will push and pull you along on a musical journey, artistically transcending from tender and delicate songs from Transylvania, to relentlessly punchy Irish dance tunes littered with funk grooves and everything in between.

Following the release of their debut album ‘When The Day Is On The Turn’ in 2014, which was highly praised by audiences and critics alike, described by fRoots magazine as “the most exciting Irish music I’ve heard in a long time…Lunasa for the new generation” ­the band toured extensively in North America and Europe, establishing themselves internationally as one of the most enthralling live shows, captivating audiences at such prestigious international events as Milwaukee Irish Fest, Celtic Connections and countless others. Highlights included a collaboration with Dougie MacLean at Perthshire Amber Fest and also a commissioned composition and collaboration with the Royal Scottish National Orchestra at a WWI commemorative concert. In 2015, the band was nominated for ‘Folk Band of The Year’ and their debut album shortlisted for ‘Album of the Year’ at the Scots Trad Music Awards.