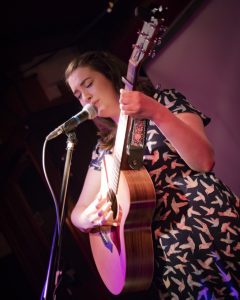 “Such is the power of Ciara’s voice, and her stories, the music is required to be subtle and gentle. A beautiful and oddly sinister collection of songs” Rigsy, Daily Mirror NI/BBC Radio Ulster

Irish artist Ciara O’Neill has brought a touch of haunting melancholy to the tried and tested Singer/Songwriter market. Her delicate yet strong vocals, poetic songwriting and subtle yet complex guitar skills have seen her career gain momentum in the last couple years.

Gaining  invaluable support from the Arts Council of Northern Ireland has allowed Ciara to enhance her career by bringing her music to international audiences in Nashville TN whilst writing with the some of the best writers Music City has to offer including Grammy winner Don Henry (Miranda Lambert), No 1 hit songwriter Gary Burr (Christina Aguilera) and Grammy nominated Drew Ramsey (John Legend) amongst many others.

In addition to performing on a regular basis in her home country of Northern Ireland other notable performances include showcasing at The Bluebird Cafe, Nashville TN (2015/16); Music City Roots, Franklin TN (2016) and performing on stage with Grammy nominee’s Iain Archer and Jim Lauderdale for a TV show entitled ‘Music City Roots, Belfast to Nashville’ (2016) broadcast on PBS into 60 million American homes.

Her debut album ‘The Ebony Trail’ released in 2016 takes the listener on a journey through darkness and light into a place that is both haunting and hopeful. With notable radio play throughout the UK and Ireland including the highly esteemed BBC6 music DJ Tom Robinson, Ciara is hoping to build on this with her still untitled second album due out in 2018.