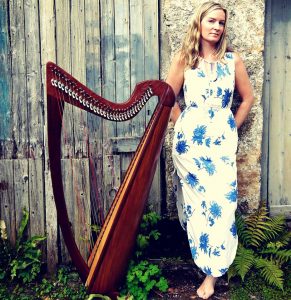 We are the Wildlife – the forthcoming debut solo LP from celebrated Irish folk chanteuse and harpist Brona McVittie – features the tracks Under The Pines and Newry Mountain which were released as a double A side single in June 2017. McVittie’s debut offering is a psychogeographic journey through a collection of traditional folk ballads and original compositions inspired as much by the geometries of London’s urban fringes as by the sonic phenomena within the great rural landscapes of Mourne. This mixing of traditional songs with her own compositions, and thematic ties between songs old and new, coupled with the use of traditional instruments (harp/flute/strings, etc.) against subtle electronic backdrops and innovative production techniques all adds up to a record that is heartfelt, timeless and yet pleasingly contemporary in feel, a perfect mix of new and old, on every front.

“Pleasingly dreamy folk tones but with a strong and haunting undercurrent of otherworldliness” Conor O’Toole, Underground of Happiness

“Nature reverberates wonderfully in an alchemy of traditional and contemporary instrumentation, making for an exquisite listen from this post-folk electronic chanteuse” Across the Line, BBC Radio Ulster

Tonights concert is a joint promotion with IMDL