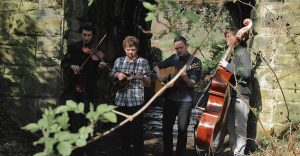 Assembly Lane brings together four young Newcastle-based musicians immersed in the shared musical traditions of The British Isles and North America. Their dynamic arrangements of traditional and contemporary material from both sides of the Atlantic effortlessly blend ancient ballads and progressive bluegrass with rich vocal harmonies and instrumental flair. Their debut album ‘Northbound’, recorded by Josh Clark at Get Real Audio [Kate Rusby, Flook], was released to universally positive reviews in November 2017.

‘Assembly Lane are one of the best and most interesting new groups on the UK folk scene at the moment. All four members are highly accomplished and tasteful musicians and their intricate yet unfussy arrangements of traditional and original folk tunes and songs successfully blend the traditions of the British Isles and USA without compromising either – a rare achievement.’ – Laura Carrivick (The Carrivick Sisters, Cardboard Fox, Midnight Skyracer)​

‘At Assembly Lane’s performance at 2017’s Wilderness Festival, we were treated to breathtaking improvisations, tight tune playing, stunning singing and elegant arrangements that displayed a deep respect and understanding of traditions from each side of the Atlantic. Matt Ord and Niles Krieger’s distinctive lead vocals brought to life intriguing tales of love, the foibles of various preachers, drinking, cowboys, prison work and disasters at sea. Assembly Lane are an outstanding group of musicians who are full of energy and passion. They have created a sound that is exceptional. Go and see them live – you will not be disappointed.’ – Shona Mooney (The Shee, Monster Ceilidh Band)