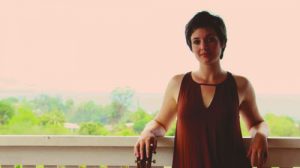 Anna Smyrk is an alt-folk singer-songwriter from Central Victoria. With a voice as pure as mountain water, haunting songwriting and bare-bones arrangements, Anna delves deep into the art of storytelling. Her live show takes you on a journey around the world, presenting rich folk tunes inspired by years of living in Cambodia and the Solomon Islands.

in 2016, Anna released her first solo EP, “Song of the Silver-tongued Magpie.” The five tracks show-case her intricate story-telling and feature Dan Musil on lap-steel and Jimmy Power on banjo. The debut was applauded by critics; Rhythms Magazine described as “a slow-burning gem”, while ABC Radio National called it “exquisite.”

Rhythms magazine: “Victorian singer-songwriter Anna Smyrk has crafted a slow-burning gem… A heady mixture of lilting folk and dark Americana-style country, combining effortlessly. Smyrk’s acoustic guitar and voice shine, focusing on quality over quantity, the songs sparse and simple, which makes them all the stronger… A solid release, which leaves one awaiting her debut full-length with some anticipation.”