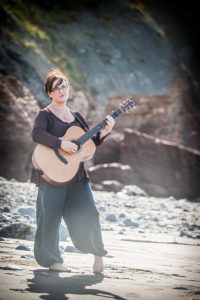 Nominated at the 2015 BBC Radio 2 Folk Awards and celebrated by The Telegraph as “one of Britain’s top folk musicians” Ange Hardy has grabbed the attention of the traditional folk music world by writing new material and embracing modern technologies whilst maintaining a traditional feel.

Her rapid rise in the folk world began when her 2013 debut folk album Bare Foot Folk was played on BBC Radio 2 and gained the attention of veteran folk broadcaster Mike Harding, her 2014 album The Lament of The Black Sheep subsequently received 5-stars from The Telegraph which led to Arts Council England funding her 2015 album Esteesee – an album of music based on the life and work of Samuel Taylor Coleridge.

Ange’s 2016 album Findings with Lukas Drinkwater was launched during a live session on the BBC Radio 2 Folk Show, and was toured nationally at venues including The Sage Gateshead and The Regal Theatre. Findings hit Number 1 in the Amazon Folk Music charts, received 5-star reviews from R2 Magazine and found itself in the fRoots Critics Poll end of year list.


Whether she’s performing in a sold out theatre or an intimate village hall Ange brings a level of honesty and openness to the stage that is a refreshing as it is disarming. Her focus on vocal harmony and her pitch-perfect vocal talent has led her toward adopting a live-looping pedal; a digital tape-recorder at her feet that allows her to record and play back layers of vocal harmony live from the stage. In doing so she brings her talent as a recording artist to a live performance, adding an extra dimension to an already captivating stage presence.

During the 4 years Ange Hardy has been on the scene she has been joined by folk legends that span the generations of the folk revival, with artists including Nic Jones (Penguin Eggs) and Luke Jackson (Fumes & Faith) joining her to sing her songs on stage, and Steve Knightley (Show of Hands), Kathryn Roberts (BBC Radio 2 Duo of the Year), Nancy Kerr (BBC Radio 2 Folk Singer of the Year) and James Findlay (BBC Radio 2 Young Folk Award Winner) amongst those adding vocal contributions to Ange’s albums.

Between recording albums Ange has always found time to write and release a Christmas single every year. She is currently writing new material (as she always is!).