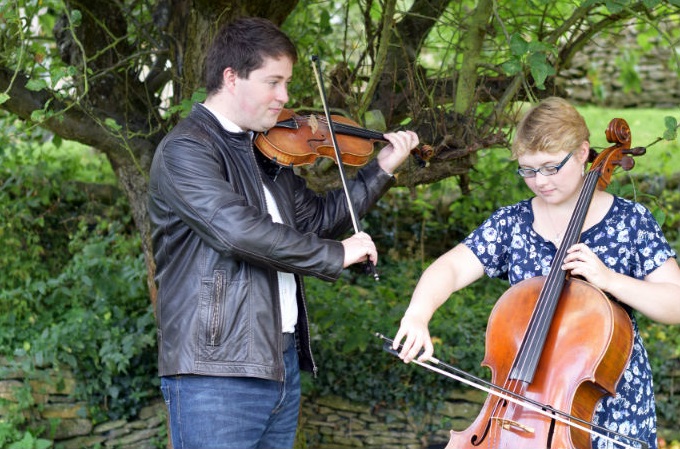 Traditional and not-so-traditional folk music, original tunes and the tales of the lives two musicians. Join multi-award winning fiddle & cello folk duo An Dhá as they explore and shape the roots of traditional music into their own unique style. Enjoy “gorgeous” airs and “upbeat” reels infused with “jazz-inspired flair” from their new album Celtivation.

“lively, fun and entertaining to all” – Afterdark Magazine

An Dhá are a Fiddle and Cello duo writing and performing folk music that combines styles and genres to explore the boundaries of contemporary folk music. They formed in 2013 at Trinity Laban conservatoire after Violinist Jaya Hanley and Cellist Sarah James visited the Isle of Skye and were entranced by the beauty and music of the Island. Their music has been played on shows including BBC Radio 3’s World on 3 and BBC Radio Scotland’s Travelling Folk. After winning the London Fiddle Convention Competition in 2016 they went on to win the Celtic Connections 2017 Danny Kyle Open Stage.

An Dhá means ‘The Two’ in Gaelic; two musicians, a Fiddle and a Cello, on a journey exploring life and music together. Their music is about their life and connection together and in November 2017 they took it a step further and got engaged on top of Arthurs Seat in Edinburgh.

Celtivation is their second studio album of original and traditional folk music after their 2015 debut album ‘Skylines’ which was inspired by the beauty of the Isle of Skye in Scotland.