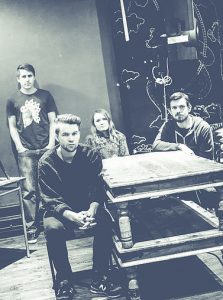 Ferocious folk foursome 4Square is winning fans from all four corners of Europe and beyond. The powerful young quartet has already stormed festivals and venues all across the UK, Canada, Norway, Sweden, The Czech Republic, Greece, and Denmark with their fiery, inventive and virtuosic brand of alternative folk.

4Square’s trademark show features the spectacle of Nicola Lyons’s simultaneous fiddle playing and clog dancing and virtuosic mandolin from Michael Giverin, galvanised by the driving sounds of Jim Molyneux’s piano and Dan Day’s percussion. The result is an infusion of folk, jazz, latin, and any other musical style they feel the inclination to absorb.

By contrast, 4Square will then stir you with their harmonious and mellow singing described by Nigel Schofield of livingtradition.co.uk as “sublimely wistful.”

“4Square are amazing…based on the range of music they tap into: traditional folk, clog dancing, their own compositions, and influences ranging from jazz to Cuban rhythms to Radiohead.” – The Folk Show, BBC Radio 2